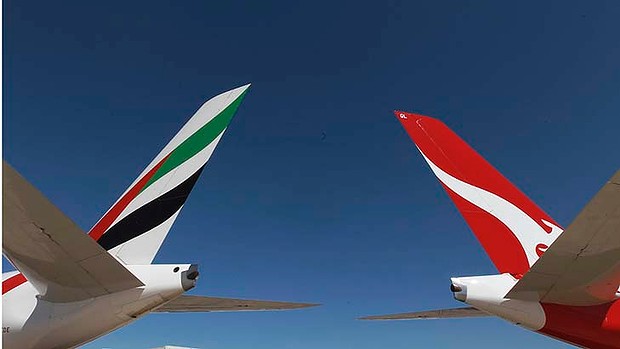 The alliance between QANTAS and Emirates, which started in 2013, is likely to be re-authorised for a further five years by the Australian Competition and Consumer Commission (ACCC). In a media release dated 16 February 2018, the ACCC Commissioner Roger Featherson states “that the alliance is likely to continue to result in a range of public benefits. Combining the networks of Qantas and Emirates provides customers with access to more flights and destinations under a single airline code and improves connectivity.”

The two carriers collaborate on services between Australia, Asia, Middle East and Europe in addition to Trans-Tasman services which includes extensive code-sharing and fare co-ordination. In late March 2018, there will be changes on services between Australia and Dubai/UK/Europe. Emirates will add a fourth daily non-stop A380 operated flight from Sydney to Dubai. QANTAS will suspend its daily flights from Sydney/Melbourne to Dubai and once again revert back to the traditional “Kangaroo Route” via Singapore for services from Sydney to London Heathrow at the same time launching Boeing 787-9 Dreamliner flights from Melbourne to London Heathrow via Perth. This new service will allow for the first time scheduled non-stop flights from Australia to the UK. Due to bilateral traffic right restrictions Emirates will not be code-sharing on the QF Perth-London and Singapore-London non-stop services.

ACCC concerns for the QANTAS Emirates Alliance for Trans-Tasman services
Emirates has scaled back its operations between Australia and New Zealand with the suspension of its daily A380 Sydney – Auckland flight in July 2017. The carrier will further scale back its Trans-Tasman services with the suspension of its daily Melbourne – Auckland and Brisbane – Auckland A380 services from late March 2018. It will continue to operate its daily A380 Sydney – Christchurch service. To compensate for the loss of these services and to maintain capacity, QANTAS has increased frequency and uses larger aircraft such as the Airbus A330 on services to Auckland. As Emirates will no longer operate between Australia and Auckland in its own right, the ACCC will remove capacity restrictions for Auckland. Emirates will maintain its daily non-stop A380 Dubai – Auckland service.

The ACCC is concerned about flights to Christchurch. The Commissioner states “that the alliance is likely to significantly impact competition on one route, Sydney to Christchurch; Qantas and Emirates are the two major operators on this route and their only competition is from the Virgin Australia and Air New Zealand alliance.” The concern will be addressed by the ACCC by imposing a condition requiring that QANTAS and Emirates provide the ACCC regular reports on seats and passengers flows, fares and route profitability. In the media release, the ACCC states that the “condition would also allow the ACCC, at any time, to set a minimum level of capacity on the route. For example, if these reports indicated that the alliance was limiting the number of seats on this route to raise airfares, the ACCC would require the alliance to add extra seats.”

Submissions from interested parties in relation to the draft determination are due by 07 March 2018. The ACCC will then make final decision authorise conduct and impose conditions.